What is reflux?
Reflux is when food and acid move from the stomach back into the esophagus.
It's normal for all babies to have some reflux – they'll spit up or regurgitate a little milk after some feedings. It's estimated that up to 50 percent of babies spit up daily. Most of these episodes are brief and don't cause symptoms.
However
, if your baby is burping up large amounts of milk throughout the day or vomiting more than a few times a day, it could be a problem called gastroesophageal reflux disease (GERD). Reflux may be associated with prolonged crankiness and pain with eating. In severe cases, babies with GERD gag, cough, or don't gain enough weight. Make sure to mention any reflux symptoms to your baby's doctor.

What causes reflux?
The main problem is a weak esophageal sphincter – the muscular valve that connects the throat to the stomach. Most babies are born with a relatively relaxed lower esophageal sphincter. Because of this looseness, food doesn't stay in the stomach where it belongs. Swallowing too much air and overfeeding can also contribute to reflux.
How is reflux treated?
In most cases, babies grow out of the problem by their first birthday, as their sphincter muscles strengthen. If your baby is being fed formula, the doctor may suggest switching to a soy-based or hypoallergenic formula. You may be advised to try smaller and more frequent feedings to keep your baby's stomach from filling too much or too often.
Some studies suggest that adding baby rice cereal to breast milk or formula to thicken it may improve some reflux symptoms. Holding your baby in a semi-vertical position during and after feedings, with his or her head elevated about 30 degrees, may help keep the milk from coming back up. Even frequent burping can reduce reflux symptoms. The doctor might prescribe an antacid or acid-blocking medication for your baby to take daily, similar to the medicine adults take for heartburn (but don't give your baby any medications without a doctor's order).
The doctor may also suggest further evaluation of your baby's symptoms with a pH probe, which is inserted into the esophagus to measure reflux episodes and acid levels.
Other ways to evaluate reflux include X-rays of the gastrointestinal tract and endoscopy.
Stay kamsified! 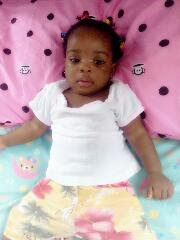