What is anemia, and what causes it?
People become anemic when red blood cells don't carry enough oxygen to the tissues in their body. Various conditions can cause anemia, including an inherited illness called sickle cell anemia, but iron deficiency is the most common cause.
The human body needs iron to make hemoglobin, the oxygen-carrying red pigment in blood. If your baby doesn't get enough iron, he/she will have fewer red blood cells – and the ones he/she has will be smaller, so his/her body tissues will receive less oxygen than they should
.

Children are especially susceptible to anemia during periods of rapid growth, when they need extra iron that they don't always get. But iron-deficiency anemia doesn't happen overnight – it's caused by a relatively severe deficiency that develops over time.
Iron deficiencies can happen for several reasons, including not enough iron in the diet, ongoing blood loss (in the intestinal tract, for example), and poor absorption of iron.
My baby seems pale and weak. Could it be anemia?
Yes. In fact, the most typical signs of anemia are pale skin and tiredness. Other signs include rapid heartbeat, irritability, loss of appetite, brittle nails, and a sore or swollen tongue. But it's common for a baby with anemia not to have any symptoms at all.
Is anemia dangerous?
It can be.
In addition to the symptoms mentioned above, a child who's anemic could suffer permanent mental and physical problems. (While an iron deficiency can be corrected, the mental and physical impairment is not always reversible.)
Iron deficiency also makes kids more susceptible to lead poisoning and infection.
Is my baby at risk for anemia?
Between 9 and 24 months, all children are at high risk for anemia, but these babies are at highest risk:
Premature and low-birth-weight babies age 2 months old and older. Full-term infants are born with iron stores accumulated during the last months in utero. These stores can last four to six months. The iron stores of babies born prematurely may last only about two months.
Babies who drink cow's milk before their first birthday. Cow's milk is low in iron. It also interferes with the body's absorption of iron, and it may replace some iron-rich foods in the diet. Milk can also irritate the lining of a baby's intestine, causing bleeding. This slow loss of blood in the stool – along with low iron intake – can cause anemia.
Breastfed babies who receive no iron-fortified foods after 4 months of age. The iron in breast milk is absorbed three times better than the iron in formula, but around the time a baby starts eating solids, he needs additional iron in the form of fortified cereals and other iron-rich foods.
Full-term, formula-fed babies who aren't given iron-fortified formula. Most baby formula is fortified with iron, however.
Should I call the doctor?
Pediatrics recommend that babies be screened for anemia at 12 months, or earlier if they were born prematurely. But if you notice any signs of anemia, do call your baby's doctor.
To determine whether your baby is anemic, the doctor will do a blood test to measure levels of hemoglobin and hematocrit (percentage of red blood cells in the blood). 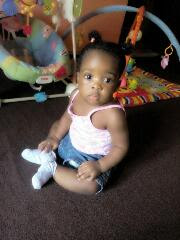 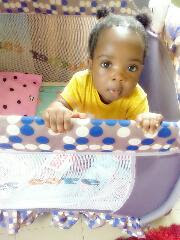 Thank U thank u Kamsified