What is gingivostomatitis?
Gingivostomatitis is the long name for a condition that results in a very sore mouth. It's caused by a viral infection and is common in children. The symptoms can be mild or severe. While it can be disconcerting to see sores in your baby's mouth — and to know that he/she hurts — usually there's no cause for worry.
Most people carry around the viruses that can cause the condition. In fact, your baby's bout of gingivostomatitis may be his/her initial infection with the herpes simplex virus type 1 (HSV-1), which most people pick up in early childhood and carry for the rest of their lives. The initial infection usually goes unnoticed, but if it does make itself known, it does so in the form of gingivostomatitis. (HSV-1 can cause cold sores, too.)
Gingivostomatitis can also be caused by a coxsackie virus, the culprit in hand, foot and mouth disease and herpangina
.

What are the symptoms?
The sores are small (about 1 to 5 millimeters in diameter), grayish or yellowish in the middle, and red around the edges. Their severity and location depend on which virus is causing the gingivostomatitis.
Your baby may have sores on his/her gums (also called the gingiva), on the inside of his/her cheeks, in the back of his/her mouth, or on his/her tonsils, tongue, or soft palate. His/her gums may be inflamed and may bleed easily.
Because the sores can be very painful, your baby will probably be irritable, may drool more than usual, and won't feel like eating or drinking much. He/She may also have bad breath and a high fever (up to 104 degrees), and the lymph nodes on the sides of her neck may be swollen and tender. If you notice these symptoms in your baby, give your doctor a call.
Note: In rare cases, gingivostomatitis that is caused by herpes can spread to the eye and infect the cornea. Herpes simplex keratitis, as such an infection is called, can cause permanent eye damage. Take your baby to the doctor right away if she has gingivostomatitis and you notice that her eyes look watery and red or that she's sensitive to light — both early symptoms of herpes simplex keratitis.
How is gingivostomatitis treated?
Because this is a viral infection, antibiotics won't help. The sores in your baby's mouth should be gone in a week or two. Here are a few things you can do to make him/her more comfortable and keep him/her otherwise healthy while he/she has it:
-Infants' acetaminophen or ibuprofen can help relieve pain and lower fever. (If your baby is younger than 3 months old, ask his/her doctor before giving him/her any painkillers. And never give aspirin to anyone under the age of 20. It can trigger a rare but dangerous illness called Reye's syndrome.) If the pain is so severe that your baby won't eat even with the help of these over-the-counter pain medications, your doctor may prescribe a stronger pain medicine.

-Though he/she may not want to drink because swallowing is painful, it's extremely important that your baby get enough fluids. Make sure she/he gets plenty of breast milk or formula. If your baby is at least 4 months old, you can also try offering him/her cool, nonacidic, noncarbonated drinks such as water or diluted apple juice. Dehydration can sneak up rapidly in babies and young children — this is the main complication you need to be aware of if your baby has gingivostomatitis. Call your doctor if your child goes for more than six hours without urinating or taking in liquid, or if she shows any signs of dehydration.

-If your baby's eating solids, the usual ones are good: strained baby food, mashed potatoes, yogurt, applesauce, and other soft, bland foods that don't require chewing. But don't force your baby to eat solids if her mouth hurts.
Can gingivostomatitis be prevented?
Because so many adults and children carry the herpes virus, and because they can pass it (and the coxsackie virus) on even if they have no symptoms, there's no practical way to prevent gingivostomatitis. You can, however, try to keep people who have an active herpes infection or any other mouth sores from kissing, sharing food, or playing in close contact with your baby. (That includes you, if you happen to have an outbreak.)
If your baby's sores are caused by the herpes virus, the virus will stay in her body for life. The good news is that the first episode of gingivostomatitis is usually the worst, and it won't necessarily be a frequent plague. 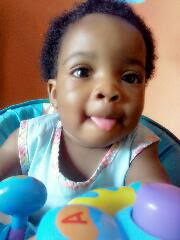 My beautiful Kam❤... thanks Mummy Ella