You suspect baby’s got an earache or some other ear issue, but how do you know if it’s an ear infection? Here are some tips..
What is considered an ear problem for a baby?
Babies often broadcast an ear problem by crying when they lie down; toddlers frequently complain by pulling on or holding one ear. Or you may simply spot some smelly discharge coming from the ear itself.
What could be causing my baby’s ear problem?
Few children
escape their early years without suffering through at least one ear infection, aka acute otitis media. By their first birthday, more than 60 percent of children will have had at least one middle ear infection. Sometimes the infection is due to a virus, but it’s also often due to a bacteria. The infection develops when fluid is trapped in the middle ear and builds up behind the eardrum. This moist, warm place is perfect for either viruses or bacteria to grow like crazy, causing inflammation and pain around the eardrum. But this inflammation isn’t the only potential ear issue. If your baby or toddler has been hanging out in the pool, she may have developed an outer ear infection, or swimmer’s ear (an inflammatory response to bacteria or some other agent in the water).

When should I take my baby to see the doctor with an ear problem?
Although you don’t want your baby to be prescribed antibiotics unnecessarily, it’s important to talk with your doctor soon after your child develops an ear problem so they can determine if it’s bacterial or viral. A severe or untreated infection can cause the eardrum to rupture, or even cause an infection in the skull behind the ear (mastoiditis), so it’s important to consult your doctor. And if your child is in pain, has a high fever, is acting dizzy or is unable to hear well, definitely pay a visit to your pediatrician.
What should I do to treat my baby’s ear problem?
To help ease some of the pain, try holding a warm, dry towel against her ear (throw a washcloth in the dryer for a few minutes). Acetaminophen or ibuprofen can also take away some of the pain. (But you have to consult your baby's doctor first before administering any medications to your baby).
And you can try elevating her head when she’s lying down — just beware of pillows, which can be a risk for sudden infant death syndrome, and find a way to safely elevate one side of baby’s mattress from underneath. Stay kamsified! 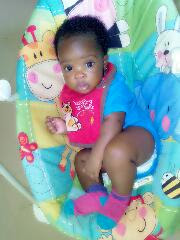 Thanks baby ur simply amazing